I PLEDGE ALLEGIANCE TO THE FLAG

With all that has happened this week, my heart is heavy laden with pain for our young fallen soldiers and their grieving loved ones, as I’m sure all of your hearts are as well.  I wanted to do something special in honor of them.

I’m so very proud of the men and women of this nation.  I am especially proud of our brave men and women in uniform, both those who have served and are now serving. What those in Afghanistan are going through is something that most of us cannot comprehend.  Only if you have served in active combat, can you understand.

While my emotions have been scattered, watching my husband who is a Vietnam Veteran watch the news on television with those knowing eyes, one thing remains constant.  That is my love and loyalty for our country.  For this reason, I felt like it might be appropriate for us to break down and analyze the Pledge of Allegiance… The Pledge that these young soldiers know all too well and are fighting and dying for this week.

The American people have been reciting out loud The Pledge of Allegiance in classrooms and gatherings throughout our great land forever, it seems.  Most of us have recited the Pledge for as long as we can remember and know it by heart.  Most of us still recite it at special events and activities.  But what do the words really mean?  Have you ever thought about it?

Did you know that The Pledge of Allegiance was written in August of 1892 by a socialist minister, Francis Bellamy (1855-1931)?  It originally read, “I pledge allegiance to my Flag and to the Republic for which it stands, one nation, indivisible, with liberty and justice for all.”

Let’s begin with the first phrase

“I pledge allegiance.”  Simply put, this means that I promise to be loyal. Now, you already know what loyalty is.  But what exactly does old man Webster say the definition of the word ‘loyal’ is?  I checked it out. – Loyalty is to be faithful in allegiance (obligation) to one’s lawful sovereign or government – faithful to a cause.

Does that mean we all agree with every aspect of our nation’s actions?  Of course not.  Rarely do we all agree with anything.  The one thing we should all agree on though is the fact that even on America’s worst day, our nation is still the greatest country on the planet.  Unfortunately, these days it seems we can’t even agree on that.  But I digress.

What can I say about the flag of the United States of America?    On June 14, 1777, the Continental Congress passed an act establishing an official flag for the new nation. It was designed to have 13 stripes, alternating red and white; 13 white stars on a field of blue represented the 13 states that united to create the USA.  The colors were not chosen by chance.  The color red symbolizes hardiness and valor; white symbolizes purity and innocence; and the blue represents vigilance, perseverance, and justice. Each state added to the Union since brought an additional star.  Today, our proud American flag touts 50 white stars against that same field of blue.  There are still only 13 alternating red and white stripes to remind us that a mere 13 colonies became states, then joined together to achieve against overwhelming odds the unachievable.  They gave birth of the greatest nation on earth.  This flag has been stomped, burned, torn, and destroyed in unimaginable ways.  Not to fear, she has survived all that and a whole lot worse.  The American flag has been flown on foreign lands in defense of liberty.  She’s been raised on the highest mountain peak in the world; planted at the North Pole; and even on the moon.  She’s inspired songs and poems, one of which became the American Nation Anthem. So, don’t be disheartened my fellow Americans.  She continues to inspire the majority of the American people today.  The American Flag will persevere.  Again, I digress…No apologies.

“and to the Republic for which it stands.” What is a Republic anyway?  Merriam-Webster defines it this way…  Republic – “a government in which supreme power resides in a body of citizens entitled to vote and is exercised by elected officers and representatives responsible to them and governing according to law.”

There are some who would say that if we believe what we are saying when we recite the Pledge of Allegiance, we are hypocrites and liars.  I won’t dignify such opinions with an explanation.  They have a right to their opinions, even when they’re wrong.  The rest of us have the right to disagree.  That’s what makes our nation so unique and precious in this messed up world.

Next phrase is “One nation under God.”  This phrase was added in 1954 at the encouragement of President Eisenhower, creating the pledge as we know it today.  It needs no explanation.

President Eisenhower adds “under God” to The Pledge of Allegiance

The next phrase, “one nation indivisible,” was believed to be a direct result of the Civil War which had been won less than 30 years earlier. The fact that the United States survived that war and held together was fresh in the minds of many Americans.

That brings us to the final phrase, “Liberty and Justice”.  I’ll let the Pledge speak for itself…

“I pledge allegiance to the Flag of the United States of America, and to the Republic for which it stands, one Nation under God, indivisible, with liberty and justice for all.”

The original salute began with a military salute, and after reciting the words “to the flag,” the right hand was extended gracefully, palm upward, toward the Flag, and remained in that gesture till the end of the affirmation; whereupon all hands immediately dropped to the side.

During WWII, the salute resembled the Nazi salute too much and the decision was made to keep the right hand over the heart throughout the entire pledge and this practice remains today.

Classroom recites The Pledge of Allegiance

There are those who say the words ring hollow when the words of the Pledge are spoken.  To that I say, the United States isn’t perfect and it’s true we still do not always live up to those words.  We as a Nation continue to grow.  We should continually strive together to become more perfect.  Make no mistake, the United States of America is the most perfect nation there is in this imperfect world.  There is none better.  I shall forever humbly recite the Pledge of Allegiance and gratefully accept America with her imperfections any day of the week.  I am most appreciative to God for the privilege of having been born in the greatest nation on planet Earth.

West Union’s most hallowed ground, The Wall of Honor 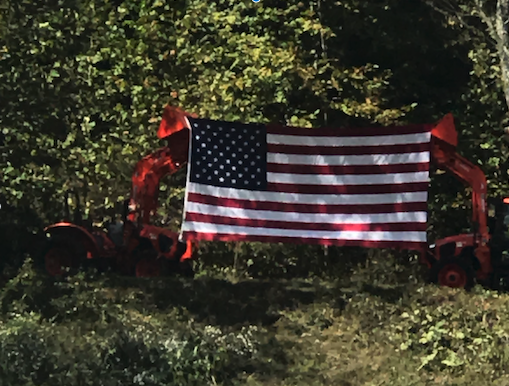 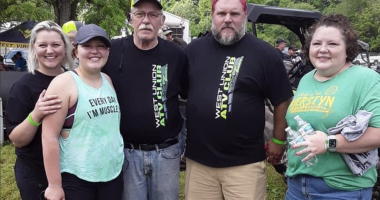 On June 12th, ATV and Dirt Bike riders gathered from all… 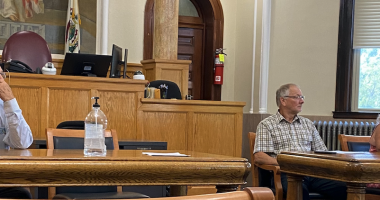 Health Department Recommendations In the absence of Commissioner Glaspell, on Monday, August… 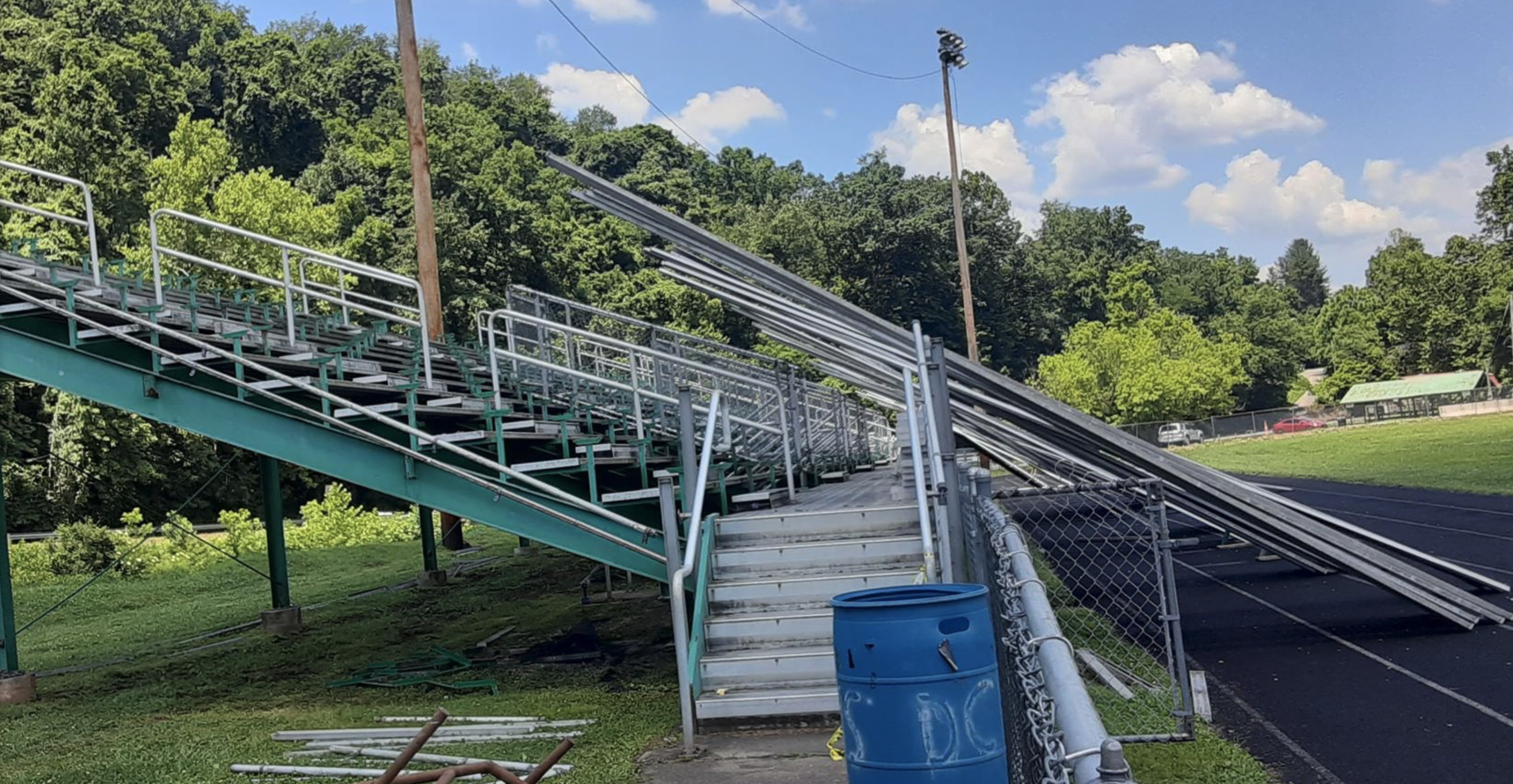